Alicante-Elche Miguel Hernández Airport, also popularly known as El Altet Airport, is a Spanish airport located 8 km southwest of Alicante. It is located in the municipality of Elche, 10 km east of its urban area, between the districts of El Altet and Torrellano. Due to its location, this airport serves a large part of the Spanish Levante. It is the fifth airport in Spain by the number of passengers after the airports of Madrid-Barajas, Barcelona-El Prat, Palma de Mallorca and Malaga-Costa del Sol.

Alicante airport mainly serves tourist traffic from foreign countries. The United Kingdom, Germany, the Netherlands and Norway are the countries that contribute the most passengers. 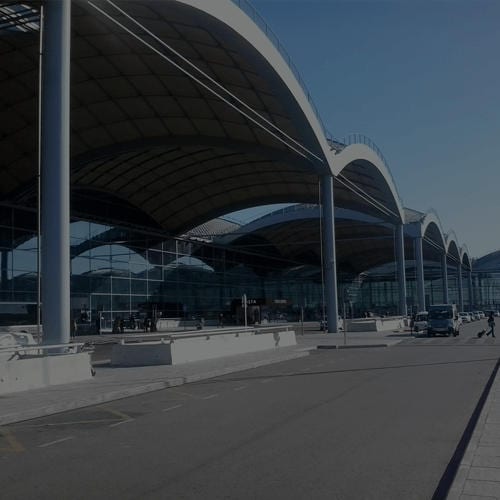 Where is Alicante Airport?

It is the largest airport for the provinces of Alicante and Murcia and covers important cities and tourist areas such as Alicante, Benidorm, Altea, Calpe, Jávea, Denia, Santa Pola, Guardamar del Segura, Torrevieja, Orihuela, Murcia, Cartagena, La Manga del Mar Menor and other industrial cities such as Elche, Crevillente, Novelda, Elda-Petrel, Villena, Ibi, Alcoy among others.

How to get to Alicante Airport?

The most comfortable way to travel from Alicante Airport is your own vehicle or taxi. There is no train stop and also the bus lines with the capitals of the provinces do not have the schedule for night flights. It is an area without access by bicycle and quite inhospitable for pedestrians.